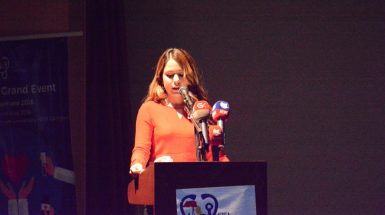 After two weeks of hard work, we are happy to announce that our campaign was completed successfully and was concluded with our event, “IFMSA’s Grand Event.” The event was held in Raparin Hall, University of Slemani on May 10, 2016.
Our aim in the “IFMSA’s Grand Event” was to introduce IFMSA to our guests, especially the medical schools and colleges, and the other NGO’s in Kurdistan. In addition to that, we wanted to discuss a few topics concerning primary healthcare, community health, and health awareness. We also gave the “Doctor of the Year” award to a prominent doctor of our city, and finally, we gave appreciation awards to our former presidents.
Speakers:
Dr. Kosar Muhamad Ali (Dean of School of Medicine, University of Slemani)
Dr. Miran Muhamad (General Director of Slemani Health)
Dr. Abdulfatah Hamarahim (Lecturer at School of Medicine, University of Slemani)
Dr. Zana Ahmed Qasab (previous IFMSA-Slemani president)
Shanga Tariq (Local President of IFMSA-Slemani)
Hoz Kamaran
Ali Kareem
Doctor of the Year award went to Professor Dr. Muhamad Omar
Former presidents who were awarded: Dr. Zana Ahmed, Dr. Vian Hiwa, Dr. Shapol Muhamad, Dr. Rebwar Faraj, Tozhar Sirwan, Raz Tariq
We would like to thank all those who attended including the medical schools and colleges and the NGO’s, particularly Hiwa Foundation.
The campaign and event were funded by Xenofarma and Medyamedlabs.

To see more photos of this project click on the links below:

This site uses Akismet to reduce spam. Learn how your comment data is processed.